“I can’t access the Wi-Fi. The battery on my mobile is about to die. I can’t find anything interesting to watch on television. I have nothing to wear. I’ve been relegated to the friend zone. I hate Mondays. I have zero likes...”

Exploring the great anxieties contained in the little dramas we face daily in the privileged comfort of our a affluent societies, AkaCorleone brings once again to Underdogs Gallery a reflection where irony and humour take on frivolous issues (which nevertheless have their serious weight) while making up the details and shaping the subjects of an entirely new body of works.

Prominently applying a bas-relief technique to a set of varied media – some new and others that have been part of his visual repertoire –, the artist transforms these volatile tensions of the modern quotidian into new iconographic vignettes, openly blending, in a fluid and effortless way, elements from the languages of some of the artistic vanguards of the first half of the 20th century (art deco and constructivism in particular) with the depurated and dynamic chromatic dialogues, the geometric volumes and motifs (curvilinear and rectilinear), the stylised lines, and the symbolic graphic referents that have characterised his own authorial language.

By interlacing contemporary themes with a pantheon of timeless forms and figures in these pieces imbued with a discreet three-dimensionality, AkaCorleone explores and questions the limits of both the very imagery with which he works and the real condition (trivial or serious) that underlies some of the problems that consume us today in this brave (and self- absorbed) first world. 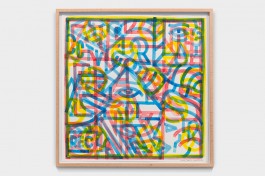 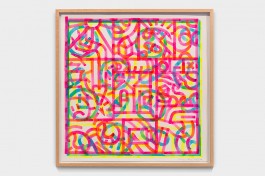